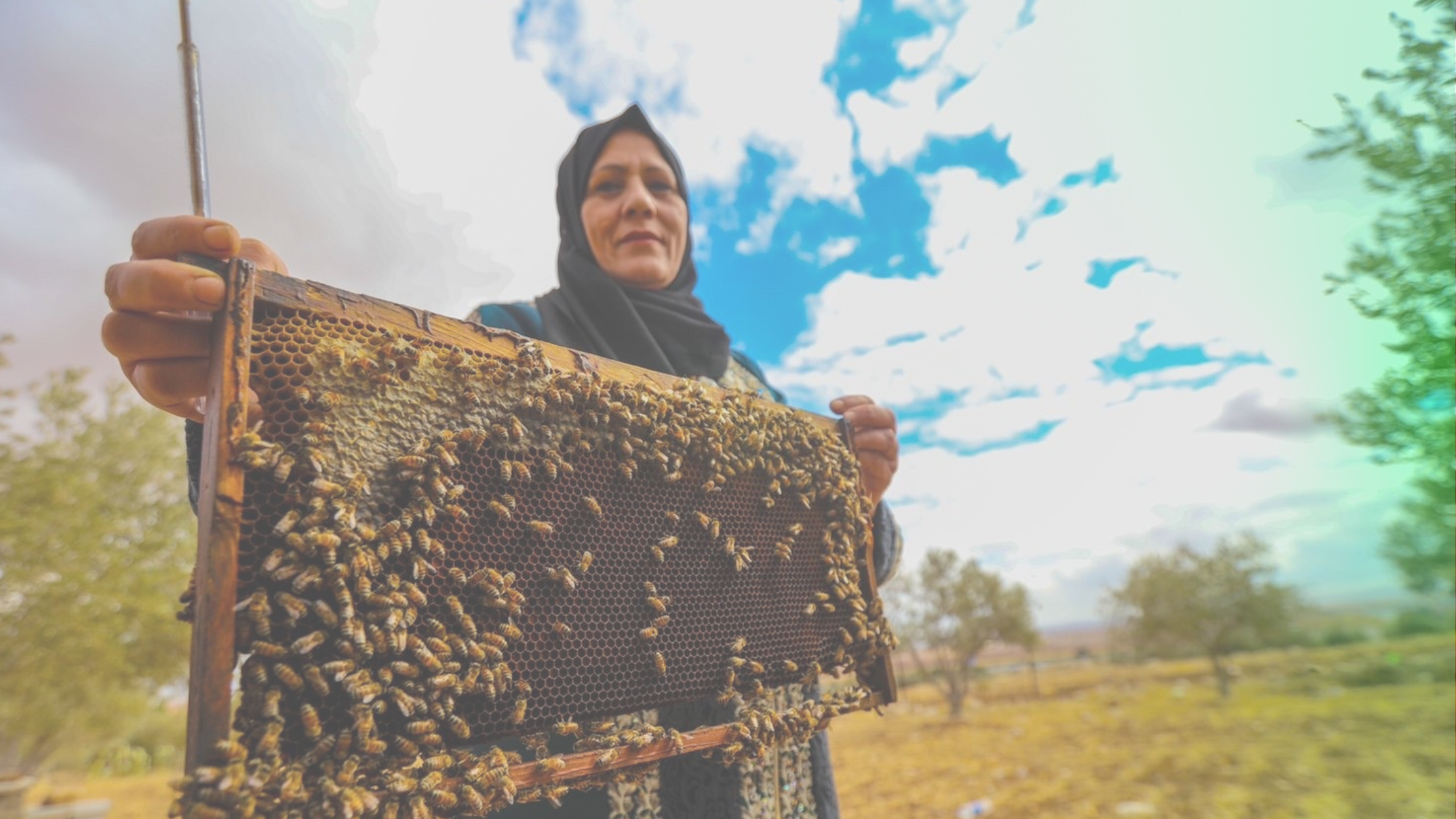 Among the orange groves deep in the fertile Jordan Valley region of Ghor, Tabqet Fahel Shaikh Hussein , Ms. Amena explains how she and her family have benefited from a charitable project that funded a practical course on the breeding of honey bees. As she does so, she leans over one of the 30 hives that dot the local landscape, takes out a tray dripping with honey and covered with buzzing bees, and inspects the progress. With the honey from the hives, she has been able to generate a sustainable income in these most challenging times.

But more than this, she has been able to help her local community. Beehive management is a critical part of the region’s agricultural ecosystem: the bees not only produce honey but also facilitate the pollination of crops in the valley. Normally, the hives are moved from the valley floor to higher ground, where the bees can avoid the heat of summer and pollinate new crops. But this all but stopped at the start of the lockdown associated with the global coronavirus pandemic, devastating the local population of bees and threatening to damage the local economy. By intervening at this critical time, by moving the hives to higher ground and teaching farmers like Ms. Amena the rudiments of beekeeping, the charitable project played a vital role.

The project is just one of many supported by the Rewell Society, a charitable foundation started thirty years ago by my father, Mohammed Ayyash Mulhim, who was a lawyer and businessman who spent his life standing up for the vulnerable and downtrodden in society. Back in 1992, the charity was called the Rehabilitation and Welfare Society. I changed the name when I became chairman after my father’s death in 2015 in order to reflect the charity’s strategy of helping poor, disadvantaged Jordanians find wellness and empowerment through work. But the animating principle remains the same: it is better to give people the tools for succeeding in the long term than to dole out cash to them for spending in the short term because once they have the skills, they never lose them—whereas if they only have some cash handouts, they soon come back for more.

As I explain in a chapter entitled “Why I Do What I Do” in my new book, Two Brown Envelopes, the work of the Rewell Society is very personal to me—and not only because my father launched the charity. Eastnets, the technology company I founded forty years ago, is the Society’s main corporate partner. Every year, Eastnets donates funds, and many employees pledge a portion of their annual salary. We make these contributions because, to a significant degree, the work of the charity is an extension of what we do in our day-to-day work. In a sense, the business and the charity are two side of the same coin. At Eastnets, our core purpose—as a global provider of compliance, payment and cloud solutions to ten per cent of the world’s banks—is to give people the tools to connect with each other and to participate in the global economy. In a different way, that’s precisely what the Rewell Society does, too.

Over the years, Rewell has provided more than forty thousand poor and underprivileged Jordanians with the vocational skills—the tools—they need to succeed in this fast-changing, increasingly digital world. More recently, there has been a particular focus on helping women in the Jordan valley participate in the local economy—in particular, supporting entrepreneurial projects related to farming activities such as cattle-rearing and, as I’ve mentioned, beehive management. Now, we are starting to expand the work of the charity, and to do this, we have built a crowdfunding website that allows people to co-fund projects with. Currently, there are 20 projects at various stages of fundraising—including a recycling project (turning discarded plastic containers, paper and metals into profitable new products), a fish farming project, and a hydroponics farming project (where plants are raised in water rather than soil). In due course, we plan to turn the website into an ecommerce hub where participating farmers can sell their produce to buyers across Jordan.

At Rewell, we don’t just donate money. Instead, we take a venture capital approach to every project. Each supported family is given a sum of money, say 1,000 Jordanian dinars (about $1,400), that must be used for very specific purposes: the purchase of some agricultural machinery or some seeds. In a very real sense, this is seed corn funding. Then, the families have to pass certain milestones, and only after this will they receive a further injection of funds. And finally, when they come to sell their products—say, some honey—they must give 20 percent of the proceeds to the charity, which then reinvests the money in other projects.

By introducing this partial payback mechanism, we hope to raise the funds to help many more people like Ms.Amena in the years ahead. Indeed, we hope to free thousands of people from the curse of poverty and create a generation of self-reliant, entrepreneurially-minded farmers across the Jordan Valley.

If we can do this at Rewell, we will fulfil a purpose shared with Eastnets: to give people the tools (the equipment, the skills and the confidence) they need to participate in the global economy.

Eastnets’ Founder and CEO Hazem Mulhim’s new book, Two Brown Envelopes: How to Shrug Off Setbacks, Bounce Back from Failure, and Build a Global Business (Houndstooth Press, 2022) is now available on Amazon and Rakuten Kobo.