The authority in charge of ensuring ethical and legal business practices in the world of banking and finance has revealed the most common weaknesses in anti-crime and anti-money-laundering systems that some retail banks have used.

The Financial Conduct Authority, in the form of a Dear CEO letter, revealed five particular areas in which some retail banks have consistently fallen short, leading to enforcement actions, restrictions in business, and requiring firms to set up independent, detailed reviews of their anti-crime systems.

Here are the most common failings in financial crime prevention systems according to the FCA.

One of the key means to avoid potential issues with the misuse of banks for criminal activity is through careful and rigorous oversight. However, the FCA found that some businesses have gaps in their understanding of financial risk.

This can sometimes be caused by a lack of oversight from senior management, a lack of understanding of the roles of each of the three lines of defense, as well as overseas offices struggling with their UK-specific regulatory responsibilities.

The FCA was particularly critical of both the business-wide and customer-specific risk assessments, which lack the detail and specificity they need to prevent crime or differentiate between different types of major financial crimes.

The FCA also criticized how due diligence practices, both for general customers and enhanced measures, were implemented, and how the account activity was monitored.

When this oversight fails, particularly with regards to source-of-wealth and source-of-funds assessments, this can lead to a firm being inadvertently used as part of a money-laundering scheme, allowing people to profit from criminal activity.

The FCA also criticized the use of “off-the-shelf” transaction monitoring systems that were not adequately calibrated for the UK market and the specific activities of their customers, as well as a lack of general technical understanding from people in charge of overseeing it.

As well as issues with the technology itself, the FCA also found some firms had neglected to pay attention to alerts raised about high-value transactions, despite media allegations that the money was obtained illegally.

Finally, the FCA noted that whilst most firms did have a process for raising internal suspicious activity reports to a nominated officer, the process in which they could do so was either not fully understood, poorly documented, or simply unclear.

As well as this, concerns were raised by the FCA about the rationale firms take for reporting or indeed not reporting suspicious activity to the National Crime Agency.

To find out how our use of AI and the blockchain can help provide you with the most up-to-date security, compliance, and AML assurances possible, head over to our Crime and Compliance section. 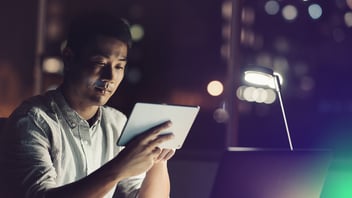 The near-term future for banks and AML compliance